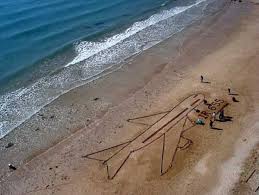 On July 3 in summer of 1988, an Iranian airplane was on its everyday flight path from Tehran to Dubai in United Arab Emirate. This airplane carried 290 passengers.
The airplane was still in Iranian airspace that suddenly a U.S. Navy warship shot down it from Iranian water and killed all passengers.
This accident is the eighth deadliest aviation disaster.
Every year around this time, Iranian people spread flowers where plane went down in the Persian Gulf.

to make an enemy plane crash to the ground, by firing weapons at it : His plane was shot down over France in 1944.

the science or practice of flying in aircraft

a sudden event such as a flood, storm, or accident which causes great damage or suffering → catastrophe :

the economic consequences of the Chernobyl nuclear disaster