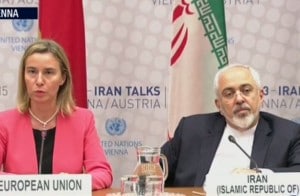 “We all know the decision we are going to take today is not only on Iran’s nuclear program, but it is much much more than this; it is a decision that can open the way to a new chapter in international relations and show that diplomacy, coordination and cooperation can overcome decades of tension and confrontation,” Mogherini said.

Mr. Zarif, for his part, expressed gratitude to all involved during the negotiations. He stressed that the historic agreement is not perfect for anyone but it is an important achievement for all of the parties involved.

“Today could have been the end of hope on this issue, but now we are starting a new chapter of hope,” Zarif highlighted.

Following the meeting, an official statement on the agreement will be issued by Iran and the European Union.

After news of the deal emerged, Yukiya Amano, the chief of the International Atomic Energy Agency, said he had signed a roadmap with the Iranian government for the clarification of past and present outstanding issues regarding Iran’s nuclear program.